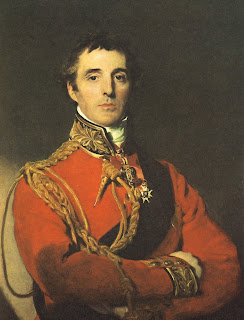 Ottawa's Wellington Street runs west from the Rideau Canal past the National War Memorial, Parliament, the Supreme Court, the Bank of Canada, and the National Archives before finally ending rather anticlimactically at the Ottawa River Parkway. Well, it doesn't really end there, because it is reborn, much to the great befuddlement of tourists, as Wellington Street West. I'll leave that for now, though.

Recently, Randall Denley of the Ottawa Citizen suggested that it would be a great idea to change Wellington Street's name to Sir John A. Macdonald Street. So far, one more Citizen writer has given his support for this idea while two others have, I think, given some fine reasons why this is a poor idea.

Those in support of the name change cite Wellington's supreme lack of any Canadian experience, his utter British-ness, as reasons behind the necessity of this name change. After all, they argue, shouldn't such an important Canadian street be named after a figure from Canadian history? Who better for this than Canada's first Prime Minister, the heavy-drinking Scot who served Parliament for eighteen years? We're grown up now, we don't need to name our streets after daddy's heroes.

Terrible idea, the detractors counter. Sir John A. Macdonald himself was staunchly British and so were the men who named this street. Why should we re-shape our history to suit our immediate needs? Why cut Canada from its British roots, from the men and women who shaped Canada and firmly believed in the British Empire? We have grown up, but we did not have a revolution. There is no need to cut ourselves off from our roots, from our history.

I can see the perspective of those who support the name change. After all, Wellington has had more than enough things named after him, from the capital of New Zealand to beef wrapped in pastry. There are at least three towns in Canada named after the Duke, and he even has his own boot. How many Canadians even know who Arthur Wellesley, the first Duke of Wellington, is?

Nevertheless, I believe it is irresponsible to try to cut Canada from its roots. Canada still has the British form of government, the queen is our head of state, and it was not all that long ago that an influential segment of the Canadian population proudly declared themselves United Empire Loyalists. Like it or not, the 1st Duke of Wellington was a hero to many of the men and women who built this country. If they saw fit to name one of Ottawa's most important streets after the Duke, why should we change it?

Two additional points that were not mentioned:

1- The Duke of Wellington funded the Rideau Canal that is main waterway in Ottawa.

2- There already exists a MacDonald St which is parallel to Cartier St. Macdonald and Cartier were great friends, allies and some even refer to them as twin brothers or Siamese twins. The two streets were named after Sir John A Macdonald and Sir George-Étienne Cartier, as confirmed by a recent research inquiry into the Archives of the City of Ottawa.

I think the Macdonald-Cartier connection is also a great symbol of the tie between Anglo and Franco Canadians.