On Multiculturalism and Self-Identity 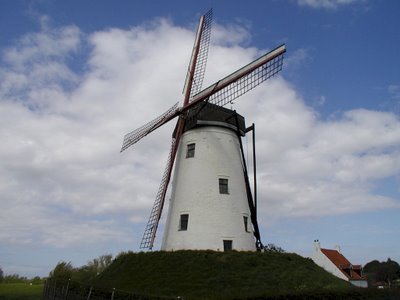 My friend Jake Belder recently posted on nationalism and his problems with Canadian multiculturalism. I agree with him on many points. There is a danger of becoming lost if a nation becomes so tolerant that its own culture is diluted into a thin, unpalatable soup. Its hard to stand up for anything when you don't stand anywhere at all.
I disagree with him in a few other areas, however. He claims that he gets a little upset with people who live here in Canada and who hold onto the Dutch culture. Furthermore, he argues that Dutch-Canadians are holding onto a culture frozen in time and that if we truly want to reflect the motherland we should, "condone euthanasia, sell vast amounts of hard drugs, and hold an incredibly vicious prejudice against all people of Middle Eastern descent." By painting a stereotypical picture of Dutch-Canadian culture and contrasting it with a stereotypical picture of modern Dutch culture, Jake has successfully shown very little. Imagining my dear Oma selling heroin on a street corner in Port Perry was a little surreal, and I am sure she would be surprised to learn that she, like many other staunch Dutch Reformed women, is living in a mirage. The Netherlands is not the Red Light District of Amsterdam any more than Canada is a poverty-stricken reservation. Of course, I am certain that Jake had his tongue firmly in his cheek, but I am, without question, opposed to his view that me and my ilk are "preserving an illusionary culture."
I would argue that Dutch people have done quite a good job of integrating into Canadian society. At the same time, I believe that people of Dutch descent in Canada have managed to hold onto pieces of their culture that make them unique and set them apart on the beautiful tapestry of Canadian life. Some of these cultural quirks and traditions might seem a little trite, but I, for one, will never call a boiling plate of stamppot "ineptly named." Delicious is probably a better description. My Dutch heritage does not define me, but it certainly enriches my life.
I was reminded of Canada's strengths when I witnessed responses of many Americans to the display of the Mexican flag by members of the Mexican-American community. They were outraged, as if flying the Mexican flag next to the American flag was tantamount to treason. I have always loved seeing international flags being displayed in Canada and I am glad that most Canadians understand that this is normal and even inspiring. The World Cup, I believe, brings out the best in Canada. Strangers laugh along with celebrating fans in the streets and neighbours become friends as they enjoy the rich international game and share their cultures.
I have read many of Jake's complaints about the lack of a real Canadian culture, but one cannot expect a country so young to have as deep a culture as, say, Egypt or China. Nevertheless, I believe the depth of Canadian artists, writers, athletes, dancers, statesmen, musicians, and intellectuals is a testament to a remarkable developing culture. I do not think it is very helpful to search for some kind of mono-cultural norm for what it means to be Canadian. We will never be a nation of touque-wearing, beer-guzzling, maple syrup sucking, snowmobile-riding, hockey-watching donut fanatics, and thank God for that! The richest cultures are the ones that are fed by a multitude of influences. Cultural dilution is only a danger when decadence and apathy get in the way of justice and equality. When a nation turns inwards it is like a dog feasting on its own stifling regurgitation. It is better to find sustenance from the cuisine of the world.
Some of the most enthusiastic Canadians I have met would put Don Cherry to shame. They love Canada's freedom, safety, community, and tolerance --- and they go to the mosque on Friday. Don't be surprised in the next ten years as names like Muhammed, Kim, and Amuneke start gracing the backs of Canadian hockey sweaters.
I am married to a Burundian-Canadian. My children will be Canadian with Burundian and Dutch genes. I am not going to tell my children that they must cheer for the Dutch soccer team and eat peppermints in order to be considered my children, but I am certainly going to share that part of their ancestry with them. I don't expect them to be defined by this part of their culture but it certainly will enrich their lives.
Posted by John den Boer at 9:06 PM
Email ThisBlogThis!Share to TwitterShare to FacebookShare to Pinterest

Very aptly written, John. I totally agree with your view of how Canada should integrate its various cultures without losing them.

Now I must find a corner where I can hide. John, your thoughts are much more well thought through than mine were. I admit a rather large amount of reactionary cynicism in my post, influenced by a few incidents in the two days preceeding my post.

I will post again in a few days with a (hopefully) more intelligent and respectful take on what it means to hold to a national identity.

Thanks for the constructive criticism.

I forgot to add that your thoughts about eternal citizenship were a point that definitely should not be forgotten.

Anonymous said...
This comment has been removed by a blog administrator.
19/7/06

Wonderful and informative web site. I used information from that site its great. » » »

Keep up the good work »