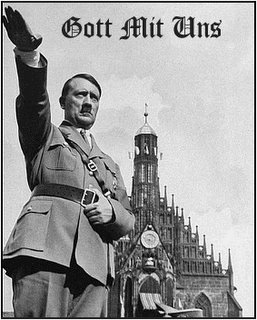 There are few so universally detested figures in history as Adolf Hitler and that is probably the reason why people debate his religion so dramatically. Many atheists like to smugly assert that Adolf Hitler was a Christian and then watch their red-faced Christian friends explode in apoplectic rage. At the same time, many Christians insist that Adolf Hitler was an atheist and then further assert that Hitler's atheism was the very force that propelled him to commit all of his horrible atrocities.

I submit that when atheists try to argue that Hitler was a Christian it is based on a fundamentally flawed understanding of both history and Christianity. On the other hand, when Christians claim that atheism drove Hitler's insanity it is not only a flawed position but also a position which will garner them few atheistic friends and likely won't promote the foundation for dialogue which Christians are supposed to be open to.

Atheists enjoy quoting Hitler's speeches and writings in their attempt to prove that Hitler was, indeed, a Christian. They forget that when they do this they are quoting a man who was a master of manipulation. Germany was a nation full of Christians and in order to deceive these people, Hitler had to use the language of Christianity. When Hitler made speeches which referenced Christ or Christianity he wanted to appeal to the masses. Hitler could not have stirred a crowd, however brilliant his oratory, if he had screamed, "You see, its been our misfortune to have the wrong religion. Why didn't we have the religion of the Japanese, who regard sacrifice for the Fatherland as the highest good? The Mohammedan religion too would have been more compatible to us than Christianity. Why did it have to be Christianity with its meekness and flabbiness?!" (Quoted by Albert Speer, Inside the Third Reich, pg. 115) or if he had shouted, " . . .Christianity is not a natural religion for the Germans, but a religion that has been imported and which strikes no responsive chord in their hearts and is foreign to the inherent genius of the race!" (13th February 1945, The Political Testament of Adolf Hitler).

Adolf Hitler was a Christian in the same way that a carpet salesman "absolutely loves" his potential customer's hideous wallpaper. Not only did this carpet salesman hate the wallpaper but he fully intended on letting the flimsy stuff quickly peel off the wall. In other words, Hitler was only a Christian by Machiavellian convenience.

Hitler convinced his countrymen he had the best interests of Germany in mind. Hitler convinced Stalin to make peace with him and he convinced Europe that he had no intentions to fight. Hitler convinced idealists, including Canada's Mackenzie King, that their appeasement would sate his appetite. How did Hitler convince all of these people? By lying. Hitler was a masterful liar which any person only slightly familiar with his life will know. The question is why some people can see these lies and manipulations, but not Hitler's deceitful Christianity. Hitler was as much a Christian as a pig is a flower. The image is ridiculous, but it shows how remarkably devious the master con-man had to be in order to make his gigantic hog's rump smell like a daisy.

Hitler's twisted beliefs were far from Orthodox Christianity and his heresy should have alarmed his countrymen. Although Hitler pined for the days of Wotan and noble German barbarism, he ultimately wanted to replace Christianity with National Socialism. This did not mean persecuting Christians because Hitler felt that Christianity had such a soft flaccid underbelly that it would eventually die of natural causes. National Socialism with its psuedo-scientific reason, inequality and dominance of the Aryan race would prevail and the Third Reich would rule for a thousand years.

Atheism is problematic in that it is humanly impossible to be an atheist. Humans, by nature, must worship something and as much as so-called atheists deny worshipping anything, there is always something they venerate. No, Hitler was not a Christian but neither was he an atheist. Atheists, by definition, deny the existence of God or gods. Hitler did not deny the existence of God just as long as he could define exactly what God is and thereby make an idol in the form of the German nation. Hitler was neither a Christian nor an atheist, he was a Nazi.

Still, atheists do have ammunition when it comes to the topic of Nazism and Christianity. Christianity in Germany did appear to be the weak easily- manipulated superstitious religion that Hitler believed it to be. So-called Christian men supported the little dictator and the church that whould have opposed him barely offered a squeak of protest. Men and women adapted to the nationalist religion with a syncretistic fervour that would have made King Ahab blush. The passivity and outright collaboration is shameful and can only, in my mind, be alleviated by looking at the few examples of Christian fortitude in the German nation.

All of Hitler's speeches which spoke about God? Resounding gongs and clanging cymbols, nothing more.
Posted by John den Boer at 4:48 PM
Email ThisBlogThis!Share to TwitterShare to FacebookShare to Pinterest

As insightful as always. I'm presently reading about another despicable con-man: Leopold II. His hypocrisy is, as you well know, quite nauseating.

I like your metaphors, and the method is as good as the message.

Piet - which book are you reading?

Good argument. I'd actualy been wondering how a christian could responed to aligations of christanites link with Natzi-ism.

John I am making a blog and I don't know how to make another post after my first one can you tell me?

Leopold's Ghost. I think you recommended it to me once.

Ah yes, I remember doing that. It is quite a well-written book.

Indeed it is. A good read, even if the content can be difficult.

Good article there John. Reading this entry made me think about what alot of diplomats and legal counsel have said Slobodan Milosevic is like. Its too bad Sloppy kicked the bucket, maybe his verdict would of concluded his manipulative nature would be similar to your analysis of Hitler. I guess 4 years couldn't narrow it down to any sort of conclusion.

Have you read Mein Kempf by any chance? Hitler uses the more ambiguous "Providence" as opposed to "God". His idead of the supernatural was something of a hegelian impersonal force, directing nautral progress; certainly not the God of the Bible.

Yeah Clint, four years seems a long time to drag a trial out. I should learn more details of his case.

Evghenis, yes, from the passages I have read of "Mein Kempf" he does seem to be referring to the Hegelian God although, maybe because of the translation, I did see the word God several times. Very good point on Hegel, I am kicking myself for not including that.

As always, you're insight and skill with the pen...er..keyboard... amazes me. Were you able to make it all the way through the Speer book? I inherited it from my Grandfather and made it 3/4 the way through before I had to put it down in exhaustion.

Brian: Thank you very much. I was unable to finish Speer and I still got a library fine . . . I don't read as efficiently as I should.